It has been seen over the past two to three years that consumers continue to fall for the same kinds of online fraud. Con artists can keep using the same techniques to steal money online. To safeguard your online financial information, be aware of the following seven harmful con games.

Two cyber-fraudsters who pretended to be Army officers conned a 21-year-old BMS student who tried to sell his bicycle on OLX into sending them Rs 39,000.

On August 30, the victim went to the Navghar police station in Bhayandar (East) and filed a FIR. He admitted to the police that he had placed an OLX ad on August 27 to sell his bicycle. The following day, he got a call from a man named Anil Kumar, who identified himself as an Army official.

The scammer offered to pay Rs 7,000 for the bicycle and claimed to be interested in purchasing it. The con artist claimed he would send someone to pick up the bicycle and asked for the victim's whereabouts. He added that the online payment would be made with an Army card, and his senior would phone the student to complete the transaction.

Then, a second fraudster pretended to be the senior Army officer and contacted him to offer to pay by electronic wallet. He claimed he would earn Rs 4 right away if the victim sent Rs 2 through his UPI account to a Paytm e-wallet account. The victim sent Rs. 2 and received Rs. 4 shortly after.

After winning the victim's trust, the con artist requested that he transfer 7,000 rupees in exchange for 14,000 rupees. The victim sent 7,000 rupees but never received it back. The con artist kept requesting additional money while claiming there was a technical problem and assuring him he would have his money back.

The victim ultimately sent a total of Rs 39,000, but the scammer persisted in demanding additional money. When the victim realized he had been duped, he went to the police in his area.

Every second person who tries to sell something through OLX and Facebook gets a call from a person who claims to be an Army officer living in the same city as the seller.

It's easy for people to get a thousand different pictures of army officials on the internet—use them as profile pictures and scam the innocent sellers.

They've listed a hundred different ways to scam the sellers over the internet, and more than 80% of people agree to have been victims of such a scam.

Yes, you read it right. The people posing as army officers often ask people to deposit 10 rupees into their account and promise to give back the double amount. The sellers often do it and the fraudsters deposit ₹ 20 for the first time and then ask the seller to deposit a larger amount so that they can deposit the double into the seller's account. A bit confusing to understand, but many people fall into this trap and end up losing money to such scammers over the internet.

The OTP, because they are BUYING

Their next scam plan is to send you the link or ask you for the one-time password. A lot of people are still struggling to understand the online payment mechanism and they end up conveying the OTP to the scammers and lose a lot of money from their bank accounts.

These scammers not only ask you for money but often pose as buyers over the internet. They ask sellers to send the goods to them over a promise to pay it on delivery. Some sellers who haven't have ad a call of that sort end up sending the products because of the buyer's connection with the army and they never get their promised payment.

These fake army scammers ask people for their UPI (often posing as buyers), and if the seller disagrees to have one, the next thing they ask for is the credit card credentials. Poor people do not know what they are calling for themselves once they share the details with them. They even share QR codes with the victims to scam them.

The cops from Tamil Nadu police traveled nearly 2000 kilometers after receiving a lot of complaints. About 12 to 14 cases from all over Chennai were of these fake army scammers who were scamming buyers with the cheapest prices of used cars and scooters with a fake identity. In most cases, the fraudsters disguised themselves as army personnel who wanted to sell their vehicle because they got a transfer.

More than 4000 cases of fraud were reported over the last year, amongst which in most cases the conmen posed as army officials. In a lot of cases, the victims were unable to get the lost money back.

How do they win trust? -AADHAR and ID CARDS

maximum of scammers over the internet who pose as army officials have fake identity proofs such as Aadhar cards. They often send pictures of their fake Aadhar to the victims to win their trust, and in most cases, they succeed.

What to do if you get a call from such a scammer?

Check back here for more fraud chronicles and scams that you can protect yourself from.

Safety is not just about protecting your credit or debit card number. It's about having control of your money till you've received the product or service you bought online!

Note: This is a good-faith initiative to educate the world about how to avoid frauds like these. Do you have a fraud that you would like to report? Please write to us at letstalk@iamvouched.com 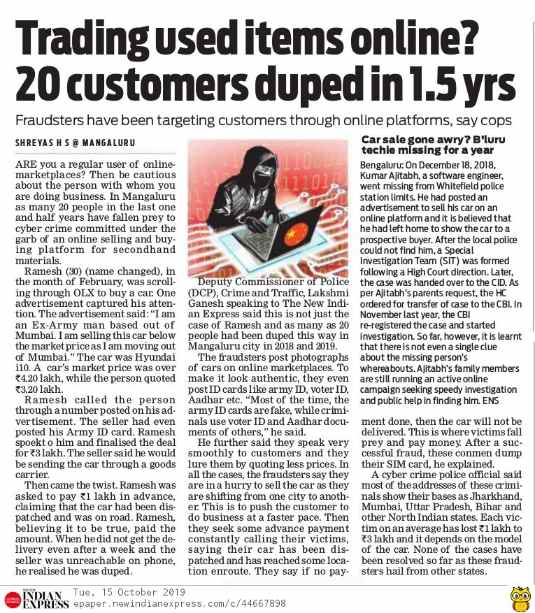